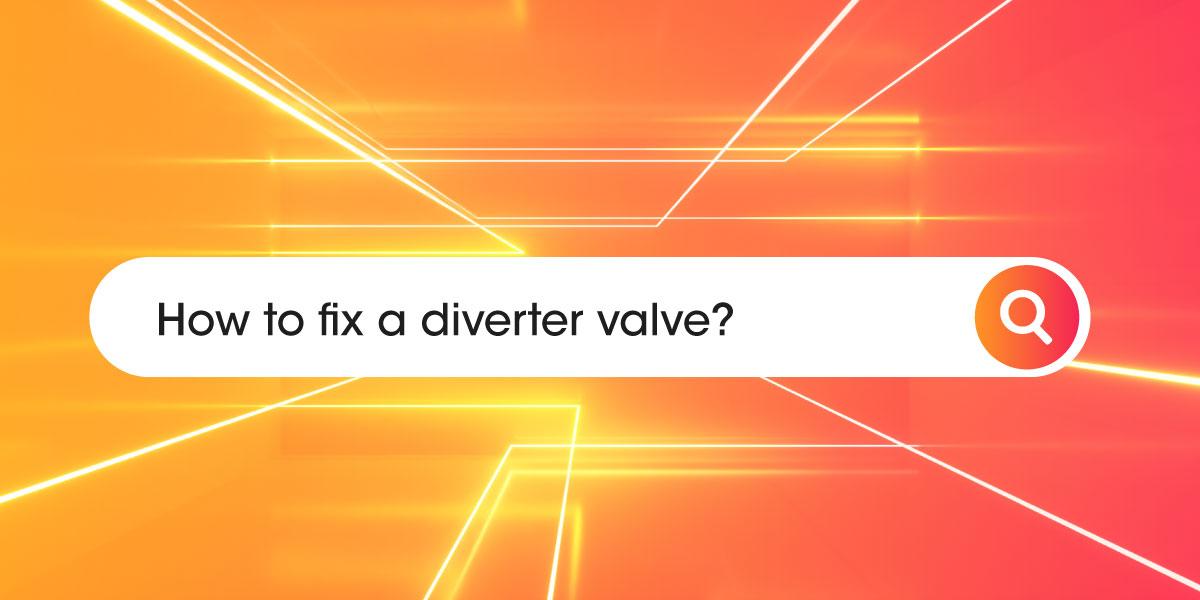 You turn on the hot water tap, and all you get is lukewarm water, even though the heating seems to be working fine, and the radiators are nice and warm.

One of the reasons for this situation happening can be because there’s a problem with a faulty diverter valve or that the valve has become stuck.

As with many issues relating to a gas combi boiler, a qualified engineer will be needed to fix the diverter valve fault. However, there are some things that you can check on that will help you to establish if this is indeed the problem with the boiler.

So, in this guide, we are going to look at what the boiler diverter valve is, how to work out if it is the cause of the heating or hot water problem, and then what needs to happen to get the boiler back up and running. If you are looking for a new boiler cost then use our online calculator below:

How do boiler diverter valves work?

The purpose of the diverter valve is to correctly direct hot water from your boiler to your taps, showers, or to your home’s radiators.

Generally, new boilers don’t experience problems with diverter valves. This, instead, is an issue that is more associated with older central heating systems. This is because the valve has become faulty following years of use.

Does a combi boiler have a diverter valve?

With more parts to go wrong, this might then seem to be a downside to this type of central heating. However, combi boilers are the most popular choice for new boilers in UK homes.

This is because they need little space to be fitted and don’t need a hot water cylinder or a cold water tank. In addition, a combi boiler can achieve very high levels of efficiency.

We’ve produced a number of review guides on a range of combi boilers to help you establish if they’re the right choice of central heating for you. These include the Worcester Bosch 8000 review and the highly-rated Viessmann 050 review.

What about system and regular/conventional boilers?

System and conventional boilers are not fitted with a diverter valve. That’s because these types of boilers deliver the hot water from a stored supply in the hot water cylinder rather than directly from the boiler.

That means that hot water can be supplied to heat the home or to the shower or tap, all at the same time.

How do you know if you have a faulty diverter valve?

So, first off, you’ve checked that you do have a combi boiler. But, before you call out a gas safe registered engineer, there are some checks that you can carry out. These will help to establish if it’s likely that it is diverter valve problems that are causing the issue.

This information will also help the engineer in understanding what’s going on. So common diverter valve problems include:

One of the most common symptoms of a faulty diverter valve is that when you turn on the hot tap to your taps and shower, you don’t get a hot water flow.

You might get lukewarm water flowing, but more often than not, the water runs cold. At the same time, the central heating works fine.

Normally, this happens because the diverter valve has become stuck. So, it might be left open on the heating supply side, which means that rather than the hot water coming towards the hot water system, it ends up being lost.

Hot water but no heating

If the hot water works fine and it’s flowing from the boiler to the taps and showers but not to the heating, then this can again be the sign of a faulty diverter valve.

Just as with the lukewarm water scenario, the boiler’s diverter valve is stuck open, but this time it’s stuck on the hot water side rather than the heating side.

Now the flow of hot water is being prevented from entering the heating system, and the valve only allows its delivery to the hot water outlets.

The heating has to be on to get hot water

There can also be times when the only way that you can get hot water to your taps and showers is when you have the heating on.

This again can be caused by the diverter valve being slightly stuck open and has then reduced the flow rate of hot water from the boiler to the heating system.

How do you free a stuck diverter valve?

A diverter valve issue is one of those situations, where you don’t try to fix the problem yourself. Instead, you need to call out a gas safe engineer who can undertake the repair work for you.

Working on gas central heating can be dangerous and is legally the preserve of a qualified professional who is listed on the gas safe register.

The boiler engineer will carry out diagnostic checks to see whether or not it is indeed a faulty diverter valve that’s causing the problem. That’s because the same issues could be caused by other problems within the boiler system.

If the fault has been caused by a faulty diverter valve that’s simply become stuck, then it may not require the replacement of the whole diverter unit. In this situation, it will just need the troublesome diverter valve to be removed and then be cleaned with a chemical solution.

Then the valve can be fitted back in place to have your heating working correctly one more with heat flowing through the radiators and hot water running from the taps and shower.

Are diverter valves easy to replace?

If the diverter valve is faulty and needs to be replaced, then it is a straightforward job to undertake when you know what you’re doing. As we’ve already mentioned this isn’t a job that you should attempt yourself, but instead, you need to call out a gas safe engineer to ensure a safe installation.

If you do attempt to carry out a boiler repair yourself, then you may find that not only is the warranty of the boiler is void, but you might also create a much bigger problem than you started with!

How much does it cost to replace a diverter valve?

When we have boiler issues, this is one of the first things that comes to mind, just how much is this going to cost to repair!

However, the diverter valve is an essential part of the boiler so if you want hot water for your taps and showers as well as heating from your radiators, then you’ll need to get a free quote from local engineers.

This is assuming that there is no warranty and no cover plan in place. If you are covered, then that’s an easy solution, as you’ll be able to get the diverter valve fixed without there being any costs involved.

If you do need to pay for the heating repair, then there will be two elements to the price of the repair; the cost of the boiler diverter valve itself and then the labour costs to replace or fix the valve.

The cost of the diverter valve itself

The cost of diverter valves varies hugely depending on who the boiler manufacturer is and which model of boiler it is that you have. In terms of the price range, you’ll be looking at between £80 and £200.

Do bear in mind, though, that not all the issues we’re mentioned necessarily mean a valve is faulty and needs replacing. It might simply be a case of it being removed and cleaned to get the hot water running to the radiators, taps and shower.

As a result, the repair will be much cheaper than if the diverter needs to be replaced.

Sometimes the engineer will assess the condition of the diverter valve and will make the recommendation that it’s replaced rather than cleaned and put back in position. This will be because it’s already showing signs of wear and tear which are likely to lead to more problems in the near future.

The cost of labour

Labour costs vary hugely and there are a number of factors that can influence this:

Unfortunately, if you’re based in London or Edinburgh, then it’s going to cost more to get your heating boiler up and running compared to other parts of the country.

Do though feel free to ask if you can agree on a fixed price before the engineer comes out. This will be on the basis that the fault is due to the boiler diverter valve.

Don’t forget though that there is a possibility that the heating problem is caused by a range of different issues and so in that case, the fixed price isn’t going to apply.

Some emergency boiler services do offer a fixed price service for heating repair, and some even guarantee repair. Do, however, make sure that you read through all the terms and conditions before committing to the service so that you know what’s included.

The day and time of the callout

If you call out the engineer to fix the diverter valve on a night or at the weekend, then you are going to pay a premium to get your hot water running through your taps. Of course, if it’s winter or you have small children, it might not be an option to wait to get your boiler fixed.

But, if you can wait until Monday morning, then the price of the valve fix is going to be much cheaper!

The make and model of the boiler

Whether your heating is supplied through a Baxi combi or a boiler system from Worcester Bosch, the ease with which the diverter valve can be removed and cleaned is going to vary immensely.

That, in turn, will dictate how long the repair will take for the engineer and so how much the labour costs will be.

Is it time for a new boiler?

It might seem a little drastic to decide to go for a new boiler just because of a faulty diverter valve; after all, the diverter valve cost is going to be much less than that for a boiler replacement for your home.

However, if your combi boiler is over ten years old, then you might find yourself calling out the engineer on a regular basis due to heating problems. And those boiler repair costs will begin to mount up.

Then, it is also worth bearing in mind that an old boiler will be less efficient than the current new boiler range.

This, in turn, will mean higher energy costs and also greater levels of carbon emissions. And this is all for the same amount of hot water to the taps, shower and heating to the radiators.

Older boilers are also not going to be covered by the manufacturer’s warranty, and unless you have boiler cover in place, there’s the hassle of trying to find reliable local installers or an engineer to come out and fix the problem.

So, as you’ve now seen, faulty diverter valves do not necessarily mean that you need a new boiler, but it could be a sign that you’re approaching the time to start thinking about a new boiler replacement.