Could a hydrogen boiler provide your heating and hot water? 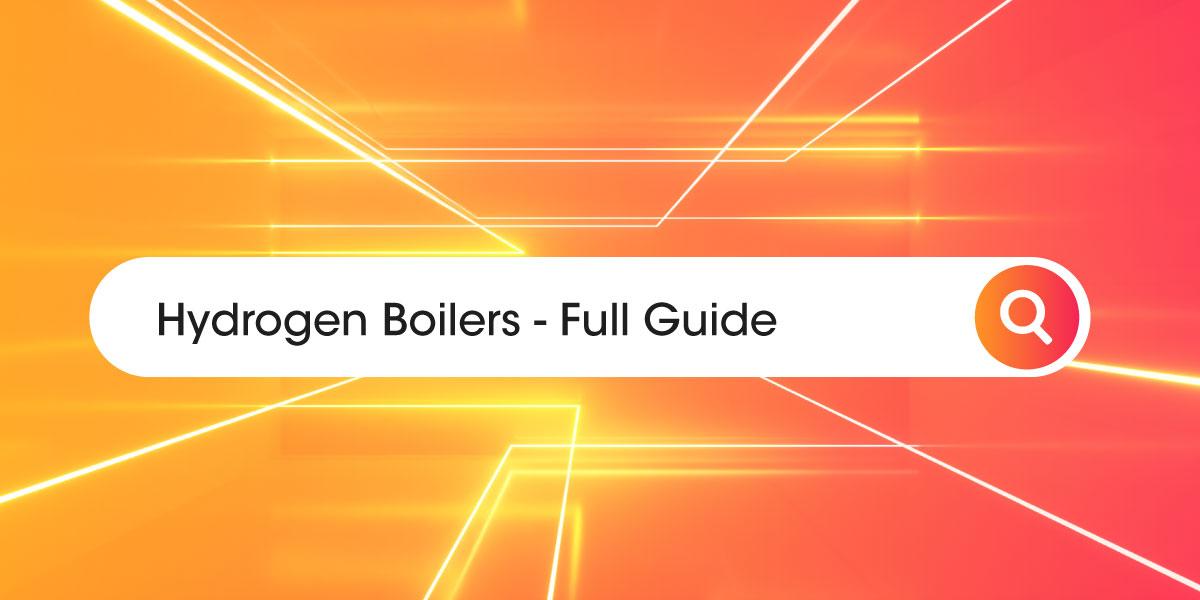 If you’ve been following environmental news, then you’ll know that the UK Government has pledged to reduce the country’s carbon emissions and, in turn, its carbon footprint.

In fact, it’s been passed into law that by 2050, UK carbon emissions will have achieved a net zero position.

But what does that mean for your heating and hot water supply? Well, this is where the hydrogen boiler comes in, and that’s because it’s a carbon-free energy carrier.

While a full hydrogen option isn’t available just yet, the big boiler manufacturers such as Worcester Bosch and Baxi Heating are working hard to get their boilers hydrogen ready.

So, we felt it was time to gather together all the information that you need to know about hydrogen and how it’s going to be used in home heating.

Why do we need an alternative to natural gas?

Did you know the gas combustion from heat and cookers is one the major causes of local pollution? In an area such as Greater London, it’s thought to contribute a fifth of the total nitrogen oxide emissions.

During the Covid 19 pandemic, people spent much more time at home, which then needed heating; that then made the situation much worse.

Greenhouse gas emissions, such as carbon, are not able to escape the atmosphere. As a result, it’s thought that these gases are responsible for the changing climate conditions that we’re now starting to see.

We also need to consider that our supply of fossil fuels are running out. So we need an alternative to gas to meet our energy consumption needs.

With all that in mind and if the UK Government are going to hit that 2050 target and reduce our dependence on natural gas, then something has to change.

How do hydrogen boilers work?

Just as natural gas boilers use gas as their fuel, a hydrogen boiler burns a supply of 100% hydrogen to heat the water supply.

The actual process is pretty much the same in that the fuel is burned via combustion, which then creates a supply of hot flue gases that can be used to heat the water.

The hot water is then ready to be used to flow around the heating system and to provide hot water at the household taps. The delivery of the fuel is also much the same with hydrogen being suitable to be delivered through the existing natural gas pipelines.

What’s the difference between a gas boiler and a hydrogen boiler?

Some parts of a hydrogen boiler need to be a little different to a gas boiler and that’s because hydrogen is much thinner than methane.

Both the flame detector and the burner are different and that’s because hydrogen is much more flammable compared to fossil fuels such as gas and so there needs to be a way of limiting the fuel if the flame becomes too big.

Then there’s the challenge of a pure hydrogen flame being invisible to the eye. So that means there needs to be a flame detector in place to let you know when a hydrogen-powered boiler is operating correctly

Do be aware that hydrogen boilers are different to heating systems that use hydrogen fuel cells and hydrogen-ready boilers, so we’ll look at those next.

What is a hydrogen fuel cell boiler?

Hydrogen is already being used in the form of hydrogen fuel cells. Instead of using a flame to create combustion and then heat, a chemical reaction takes place to generate both heat and electricity.

This makes them known as a combined heat and power (CHP) system that is well known for its incredibly high levels of energy efficiency.

While the technology for hydrogen fuel cell technology exists, at the moment, there aren’t many options for a home setting. The Vitovalor PT2 from Viessmann is one option.

This CHP system is able to provide heating and hot water by converting hydrogen into energy, meaning that you no longer need to draw power from the gas network nor mains electricity.

Do be aware that right now, fuel cell technology is very expensive, but we’re sure that this will change as more companies develop innovative solutions.

What does hydrogen ready mean?

A hydrogen-ready boiler replacement can use both natural gas and hydrogen as fuel. This makes them a future proof solution for when the UK gas network switches from methane to hydrogen.

It’s thought then when the gas network is ready to receive hydrogen, it will be phased in slowly rather than going from all gas to 100% hydrogen.

The current gas infrastructure is capable of delivering the hydrogen blend without needing any large scale changes. Research has indicated that no changes would be needed to most UK boilers when a mixture of 20% hydrogen and 80% natural gas is used.

This then makes that hydrogen ready boilers are already installed in our homes and so the delivery of this mixture of energy products has become the aim for 2025.

As an example of a hydrogen ready boiler, take a look at our Viessmann 100 review.

Is there a by-product when using a hydrogen boiler?

The only by-product of using hydrogen gas in home heating systems is water. This then makes it a carbon dioxide-free alternative source fuel.

We should mention though that one of the ways of producing hydrogen gas is called steam methane reforming.

A by-product of producing hydrogen in this way is carbon. Now, this would seem to be a bit of an issue but the carbon produced this way can be captured before it’s released into the atmosphere.

When will hydrogen boilers become available?

At the moment, the 100% hydrogen boiler is not a viable alternative to natural gas.

However, Worcester Bosch has released a prototype boiler that runs on hydrogen energy and fits into the footprint of current gas boilers. That means that they then become a possibility for the average home once the hydrogen gas network is in place.

In collaboration with Baxi Heating, Worcester Bosch are currently showcasing the first demonstration homes in the UK to have a hydrogen boiler fitted. This is as part of H21, an innovation project that’s organised by OFGEM.

Northern Gas Networks are leading the project team, with the Health and Safety Executive, National Grid and other gas networks as partners.

Martyn Bridges is the Director of Technical Communication and Product Management at Worcester Bosch. He recently stated that hydrogen boilers will offer the opportunity to utilise the existing infrastructure rather than replacing the whole network.

With the UK Government banning natural gas boilers from being fitted into new homes from 2025, the race really is on for companies to provide a boiler using renewable energy sources.

It’s also widespread knowledge that hydrogen boilers will be the same new boiler cost as gas boilers, giving peace of mind that homeowners are not going to be faced with higher costs for replacing a boiler.

So, what does this all mine for my central heating?

So you can see that things are changing and our reliance on natural gas needs to be reduced.

It would be an error to think that we can carry on as we are without any repercussions. Hydrogen gas offers a real alternative to reduce carbon emissions.

Right now, you can check if your boiler is hydrogen ready by taking a look at the handbook or the details on the manufacturer’s website.

Stuck on what boiler to get? Read more here: Best combi boiler guide

If you’re in the market for a new boiler whether that’s combi boilers, system or regular, do check that any on your shortlist are hydrogen ready boilers.

As ever, we like to provide you with a balanced perspective. So let’s finish off with a look at the advantages and disadvantages of switching to a hydrogen energy source.

There have been huge improvements to the efficiency levels of the natural gas boiler. 95% and above has become relatively normal for the heating in our homes.

2. Kinder to the environment

With the need for a reduction in greenhouse gases such as CO 2 and nitrogen oxide, hydrogen offers renewable energy solutions that are a zero-carbon alternative.

3. Utilisation of the current infrastructure

As stated by Martyn Bridges from Worcester Bosch, the delivery of hydrogen would need very few changes to be made to existing gas pipelines.

So that makes the project to be able to deliver hydrogen to UK homes a relatively straightforward one to implement.

Hydrogen boilers are similar in appearance and size to existing natural gas boilers. That means that they’ll fit into the same space and be very similar to operate.

As with everything, there can be a few compromises that need to be considered.

Right now, it’s incredibly expensive to produce carbon whether that’s by steam methane reforming or electrolysis. That means that it’s just not a viable option for the vast majority of homes in the UK.

Research is currently underway to try and find a cost-effective way of producing this low carbon alternative energy source.

Steam methane reforming does produce some carbon but that can be captured to prevent it from becoming an issue. The electrolysis manufacturing technique doesn’t present this problem.

So, this might have made you think about your current heating system and made you check if it’s a hydrogen ready boiler such as the Worcester Bosch 4000.

If it’s not and you’ve had your boiler for a while this might be the opportunity to rethink how you heat your home.

While we can’t yet provide a new boiler quote for a hydrogen-fuelled system, we can help you find the most efficient and future proof solution that’s currently available.