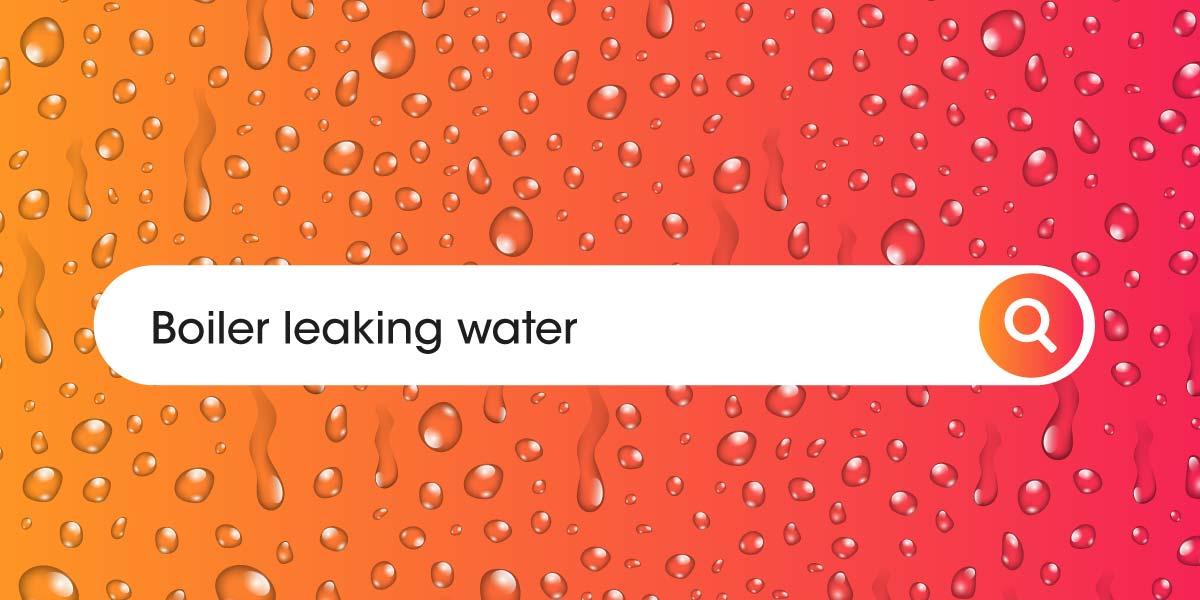 An unexplained pool of water is never a good discovery in your home. And when it’s right underneath your boiler, then that’s probably not a good start to the day. However, there is a whole heap of reasons as to why this might have happened.

So turn off the water supply to your boiler, mop up the water because you don’t want any accidents, and let’s then go through some of the reasons why it might be happening and what you can do about it.

Why is water leaking from my boiler?

A modern gas boiler is what’s called a sealed combustion chamber. That means that water should not be able to escape from the heating system. So, if your boiler is leaking, then that’s a sure sign of problems, and there are several reasons why this might be happening.

Do bear in mind that you’ll probably have to call out a gas safe registered engineers to carry out an inspection. That’s because they’re the only professionals who are legally allowed to take the boiler casing off and work out what’s going on.

When a boiler is leaking water, it’s a potentially dangerous situation so that’s even more reason why you need a correctly qualified gas safe engineer to get it fixed.

Your boiler needs a delicate balance between the air and water within the heating system to operate correctly. If your boiler’s pressure is too high then the pressure relief valve kicks in. Then you get the leaking water as a way to reduce the excess pressure and get the level back down to a safe point.

This valve is also known as the pressure release valve, so you may see it referred to like this within your boiler manual. Your boiler might also be fitted with a temperature control valve that closely monitors the water temperature and prevents it from getting too high.

To check if the boiler pressure is too high, take a look at the pressure gauge on the front of the boiler. If the pressure exceeds 2 bar, then it’s going to be too high. To prevent any further damage and fix the leaking boiler issue, that extra pressure needs to be released.

So you need to get the boiler pressure down to between 1 and 2 bar. This is simply done by bleeding the radiators while keeping an eye on the pressure gauge.

Low boiler pressure can also cause problems, so it’s important not to let too much out as well. You’ll know if low pressure is a problem by your radiators not heating as they should and also through checking the pressure gauge on the boiler.

If your boiler creates too much pressure or even loses pressure on a regular basis, then it’s a sure sign of something else not working as it should.

Boilers have water running through them and the central heating system 24 hours a day, 365 days a year. With this constant flow or even just the presence of water, parts can begin to decay. Once a seal becomes damaged, then the result is a leaking boiler.

This is another job for your gas safe registered engineer. That’s because they will need to go into the mechanics of the boiler to find the damaged seal and then replace it.

If the boiler is leaking water because of a minor sealant issue, then it can be a cheap fix. However, there are times though when corrosion has caused the problem and it might end up being more economical to begin looking for a new boiler.

Even the best makes of boiler don’t last forever. Parts like the temperature sensors and temperature valve along with the boiler pump, can become faulty or just worn out due to wear and tear.

In fact, ten years is considered to be a good working life for a boiler and heating system. If you’re at that ten-year point, then it might be time to consider a new boiler.

An old boiler is not only unreliable they are also much less efficient than modern boilers.

Most boiler leaks are the result of either corroded pipes or hot water cylinders. Over time they become brittle and that’s when the leaking boiler scenario comes in.

If you’re not sure where the leaking water is coming from, follow the boiler pipework and look for that telltale drip. Take a good look at the pipe fittings where there are joins and where they turn a corner as they tend to be key problem zones for water leak issues.

If it’s just a small section of the boiler pipes that have become corroded, then it can probably be repaired. This doesn’t have to be undertaken by a gas safe registered engineer if the problem pipe is outside of the boiler.

However, we strongly recommend ensuring that any boiler engineers that you call out are experienced. Otherwise, you might end up with a bigger problem on your hands!

Where the corrosion had happened inside of the boiler, then a new boiler installation might be the best option. Knowing that a brand new boiler gets you out of the constant repair bills could be worth every penny.

It might well be cheaper than you think and new boiler installations can be started within a couple of days of the order being placed. Find out all your options with a new boiler quote.

We’ve already mentioned the need to check the joints for corrosion but it could be that it’s a loose joint that’s resulted in your boiler leaking water. As the pressure builds inside the heating system then it’s going to expose any weak points.

This might be one that you can attempt yourself but make sure you tighten the joint the right way and don’t cause a spray of hot water to come flying out. If that’s even a remote possibility, then a heating engineer can come and fix that leaking boiler for you in minutes.

You would hope that a new boiler would mean that all the worries of any problems would disappear overnight. But, if you decided not to get a gas safe engineer in to fit the heating system then a leaking boiler could be one of the outcomes.

Shoddy work resulting in poorly fitting pipes and loose joints are going to lead to a leaking boiler. And this issue is completely avoidable when an experienced heating engineer completes the job.

The heat exchanger is one of the key components of your boiler. It takes the heat from the hot gas and then uses it to heat the cold water. It’s not too unusual for them to crack or become damaged in boilers reaching the end of their working life and it can be a common problem with budget boilers.

This is one of those issues that you’re not going to be able to diagnose until the boiler case is off, so again the job of a qualified engineer. Unfortunately, it is an expensive repair so do balance up the cost of getting the boiler working again, with that of a new boiler cost.

What about gas leaks?

If your boiler is leaking gas then you need to take immediate action. A gas leak can be incredibly dangerous and leaking gas having the potential to quite literally take your house down.

Advice from the National Grid on a suspected gas leak is:

If you smell leaking gas:

2. Don’t turn electric switches on or off

3. Open all of the doors and windows

4. Turn off the gas meter at the control handle, unless the meter is in the cellar, then leave it alone

Do also make sure that you fit a carbon monoxide detector in your home. Fumes from this gas are odourless so you have no idea you have a problem until it might be too late.

If you can see your boiler leaking oil or you spot oil stains under your boiler it needs immediate attention from a heating engineer. While not generally dangerous on its own, if there is any risk of the oil being near a flame, then the results can be catastrophic.

If the oil tank is leaking, then Government advice is to, first of all, prevent the oil from soaking into the ground or going down drains and then to contact a UK spill accredited clean-up company.

Is a leaking boiler dangerous?

Although a boiler leaking water is not as serious as a gas leak, it could be an indication of a bigger problem. If that’s not promptly repaired, then the boiler leak could go on to cause other problems.

These include short-circuiting of the electrical components, rusting, and damage to flooring and the boilers immediate surroundings.

So, rather than being dangerous, a boiler leaking water is more likely to be a huge inconvenience and hassle that you could do without!

Boilers are a little like cars, when one thing goes in older boilers, then there can be others just waiting to break down at the most inconvenient time.

Can I fix a leaking boiler?

So, as we’re already mentioned there are a few repairs that you could undertake yourself and then there are those that need the attention of a qualified engineer. A boiler leaking water that requires the casing to be removed to identify the issue, needs a gas safe engineer.

The problem is, it acts as a sticky plaster. So even though it may seem as if you have carried out the boiler repair, the hole is still there. And over time, the sealant will break down and then the pipe will begin to leak water once again.

How to prevent boiler leaks

One of the critical factors in preventing a leaking boiler is in good maintenance. So that means ensuring that a heating engineer carries out an annual service and that any small issues are quickly resolved.

Many minor problems can quickly escalate and result in a boiler leak so as tempting as it might be to ignore them, it’s really important that you don’t.

Also, consider investing in a magnetic boiler filter. These help to prevent debris building up in the pipes which could then result in increased pressure on the pipework. That, in turn, can cause a boiler leak, especially on older pipes.

A magnetic filter can also help improve the efficiency of your boiler. That’s because it does not have to work as hard to force the hot water around the heating system and through all of that sludge and debris.

In turn, your heating bills will be lower because the boiler isn’t needing to use as much energy to do its job.

Is it time for a new heating system?

If you’re finding yourself calling out a gas engineer on a regular basis then it really is time to consider a new boiler. Not only are modern boilers more efficient you’ll also be able to relax without worrying about how much the next boiler repair is going to cost.

If you’re wondering which boiler is the right one for you we have several guides to help you come to a decision.

From the cost of a new boiler in our Viessmann boiler prices article through to our in-depth guide on individual boilers such as our Worcester Bosch 8000 review we can help you find the perfect boiler for your home.