What is a power flush? 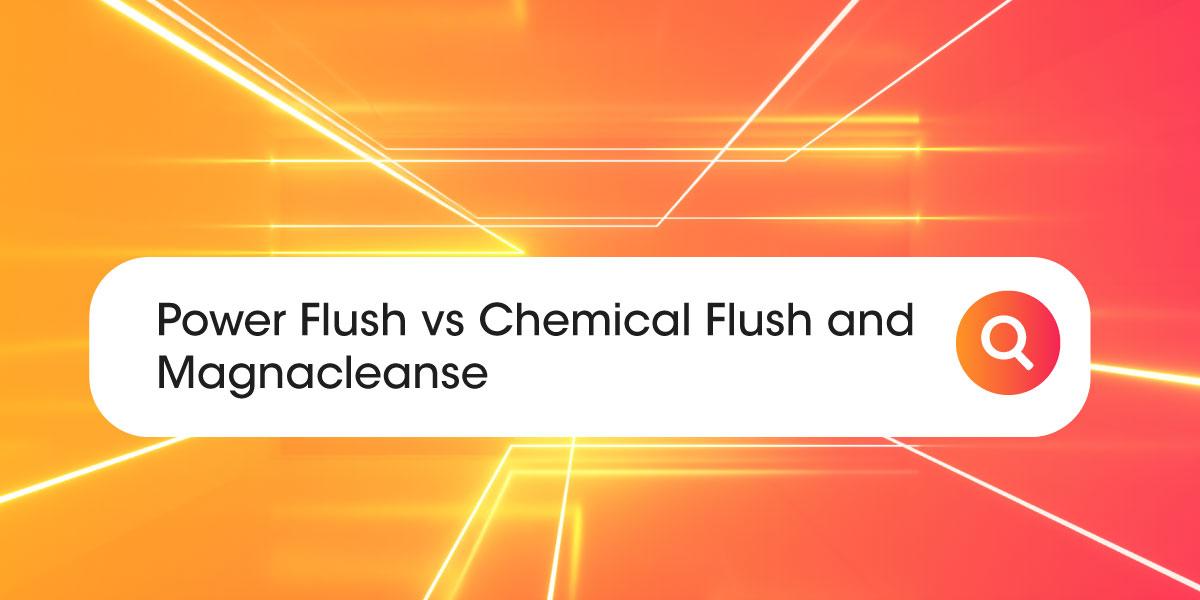 MagnaCleanse Vs Power Flush and Chemical Flush: Which Is Best?

When your central heating isn’t performing in the way it should, it could be time for the system to be flushed. But then the question of power vs chemical flush rears its head.

Well, both of these methods flush out the rust and debris that begins to build up in the pipes of the heating system. When that’s lingering in the central heating system, then the hot water can no longer reach all the radiators in your property.

As a result, you get a lower heat output or cold patches, and then your home doesn’t get as warm as it should do.

Does your heating boiler need a chemical/power flush?

In this in-depth guide, we’re going to look at both ways of flushing your central heating system. And that’s no matter whether it’s a regular, system or the best combi boiler.

We’ll investigate how long the flush takes before looking at costs and considering whether it’s something that you could do yourself.

What are the signs of a system needing a flush?

If you’re wondering if your central heating system needs a flush, there are a few signs that will give you a hint:

There are also some other elements that make it more likely that a flush will be needed.

If your radiators are older, then they are more likely to need a powerflush than a system that’s been installed more recently.

Annual servicing of your boiler can identify problems before they begin to cause significant issues.

Copper heat exchangers tend to corrode faster than stainless steel. So that then means that there are greater levels of debris pushed into the heating system.

What is a chemical flush?

A chemical flush doesn’t send the water through the system at high pressure. Instead, it relies on gravity to empty the system of water and then refill it.

When cleaning the system, a chemical flush is dispersed around the system, and that then results in the removal of the debris and sludge.

Once that’s completed, then the system is washed out with clean tap water and boiler inhibitor. The inhibitor prevents rust from forming and so protects both your boiler and the metallic components.

How long does a chemical flush take?

A chemical flush takes just a few hours to complete, though that of course depends on how many radiators need to be flushed.

Can you do a chemical flush yourself?

Because you’d be working on the radiators rather than the boiler itself, there is no legal requirement for a gas safe engineer to carry out the work. However, this can be a very messy job and one that can usually be completed much quicker by heating professionals equipped with the correct tools.

How much does a chemical flush cost?

A chemical flush can be as little as £100. Now this depends on the number of radiators and how blocked the pipes are. But if you’re looking at a power wash vs chemical flush on the basis of cost, then the chemical is going to be much cheaper.

Advantages and disadvantages of the chemical flush

So, is the chemical flush the right option for your central heating system?

To remove limescale, descaling materials are flushed through and then a corrosion inhibitor is added to prevent further rust from forming.

Sometimes, if the radiators have particularly stubborn deposits or blockages that the chemicals and pump haven’t been able to remove, then the engineer will use tools to dislodge them.

How long does a power flush take?

A power flush can take a full day to complete but without it you’re not going to be getting the heating your home needs. There are a number of factors that will influence the time needed:

Can you do a power flush yourself?

Just as with the chemical flush, there are no rules to prevent you from carrying out a power flush yourself. However, we strongly recommend that you engage the services of a gas safe heating engineer.

Trying to do power flushing yourself means that first of all, you need to buy all the kits and then spend a day trying to get it done.

Experience also tells us that it’s one of those jobs that seems to be really straightforward, but when you’re trying to get that build-up free while not creating a huge mess in your home, you may well regret the choice to go with the DIY option!

Also bear in mind that boiler manufacturers are not too impressed with the customer who attempts to service their own system. That can then mean that your warranty becomes invalid if you carry out the flush of your central heating system yourself.

How much does a power flush cost?

We’ve already mentioned that a power flush can take a heating engineer all day to complete, especially if you have a central heating system with a large number of radiators. Typically the cost is around £750 but that does depend on where you are in the country, the boiler type and how much of the engineers time is needed to fix the issue.

Advantages and disadvantages of the power flush

If you’re now asking yourself the question of whether a power flush is the right option for your heating system, let’s take a look at its advantages and disadvantages

Some boiler companies, in recognition of the issues that a debris build-up can cause, have begun to fit magnetic filters to their boilers or enable one to be fitted post-installation.

Magnetic filters catch the sludge, which is made up of rust and other debris and dirt and then prevent it from entering the system and causing problems.

Do be aware though that not all boilers can have this type of filter post-installation. So if you’re getting a new boiler that has this as an option, you should ensure that it’s added to the initial order.

You should also be aware that fitting this type of filter to a system that already has issues won’t clear out the blockage; a powerflush will be needed first.

Can a power flushing process be used on microbore systems?

A powerflush can be used with a microbore system but it can take longer than with a standard system. It’s also not unusual for these types of systems to have a problem with a build-up of thick sludge.

That means that for this system, a chemical clean may not be enough to do the job and that a power flushing is going to be needed.

What if I don’t flush the system?

If you don’t tackle the issue, then there are a number of potential issues. First of all, your boiler system will operate with lower levels of energy efficiency and higher heating bills. That in turn also means more cold patches and a lower radiator temperature.

In the long term, energy bills will get higher and your carbon footprint will grow even with an efficient combi boiler.

Then there’s also the risk of damage to the boiler and expensive components such as the pump as the rust continues to accumulate.

But there’s more bad news, because along with issues already mentioned, the lifespan of the boiler may be reduced along with potentially affecting the warranty.

So while the cleaning process can take even experienced engineers time and as such be a costly process, it prevents damage of a kind that could result in the need for a new boiler.

So, power flush vs chemical flush: what’s the verdict?

If you have an old system that’s perhaps not had as much attention as it needed then a power flush could bring it back to life even if the cost is higher than the chemical option.

But if you’re having a new boiler fitted, then a chemical flush may be all that’s needed to ensure that the new system is able to operate correctly.

It may be that the time has come for a boiler replacement to be considered. That the power vs chemical flush question is a moot point because the damage is already done. Or perhaps the existing boiler is already old and has low levels of energy efficiency.

That then means that now’s the time to get a new boiler quote and look forward to a warm home, a reliable source of hot water, and lower heating bills!